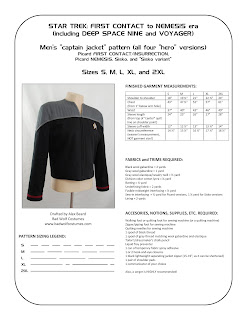 This is a sewing pattern for the men's "captain jacket," which was first introduced in Star Trek: First Contact, seen in several variations throughout the later seasons of Deep Space Nine and Voyager, and stylistically finalized in Star Trek: Nemesis. 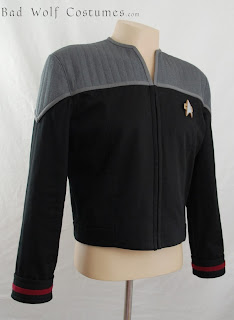 It includes all four "hero" versions of the jacket seen throughout the era (allowing the costumer to construct the version of their choice): the Picard First Contact/Insurrection version, the Picard Nemesis version, the Sisko version, and the "Sisko variant" which was only seen in two episodes.

This uniform was extensively researched and meticulously drafted to be as screen-accurate in its construction as possible. It includes information about the finished garment's measurements, all materials required, detailed instructions, and optional pocket placements inside the jacket to make it a more practical garment for public events.

Also included is a copy of our FREE in-depth PDF tutorial on CD! This contains a wealth of information not on the printed instructions, including a detailed analysis of the uniform's construction with accompanying HD images, known sources of the necessary materials (though these can vary from time to time), acceptable "substitute" materials for those on a budget and/or with vegan sensibilities (as the originals were wool), and available dye formulae.

The tutorial instructions are accompanied by a multitude of pictures and diagrams, various sewing tips (and other options) along the way, and instructions for how to alter the pattern if necessary to achieve an ideal fit.

The pattern is printed on three large sheets and a printed copy of text-only instructions is included in addition to the free tutorial.


Order this pattern from our Etsy shop! 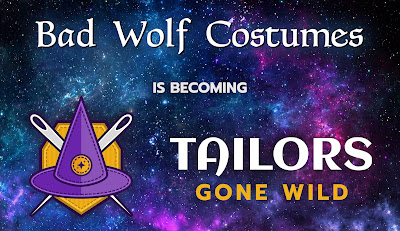